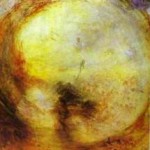 Much of the later work of Joseph Mallord William Turner (1775-1851) is the epitome of abstraction, that is, his images are not merely nonrepresentational. The paintings featured in this online exhibition are truly reified representations of seascapes, landscapes, and cityscapes. They are so reified, in fact, as to be almost symbolic of what they depict rather than illustrative. Dactyl Foundation for the Arts & Humanities presents “Turning on Turner,” an online exhibition of contemporary artists whose work is influenced by the great British painter. The show includes works by Dozier Bell, Pamela Bowers, James Crosby, Joy Garnett, Neil Grayson, and W. Whitney Smith III. Shown left is Turner’s variously named Light and Colour (Goethe’s Theory)- The Morning after the Deluge- Moses Writing the Book of Genesis (c. 1843), Oil on Canvas, 787mm x 787mm

Bower’s Amphibious Longing can draw parallels with Turner’s Sunrise with Sea Monsters (c. 1845), while her painting Awakening of the Hydra draws comparisons with Turner’s Death on a Pale Horse (c.1825 – 30).

James Crosby’s Autumn (1999), comes as close as possible to landscapes without losing the effect of abstraction. Crosby is masterfully trained in the same techniques used by Turner. His paintings might be compared to Turner’s Mercury Sent to Admonish Aeneas, exhibited 1850, and Scene in Venice (circa 1840-5).

Neil Grayson presents a series of paintings that explore concentrated light sources such as those seen in Turner’s sunsets or sunrises, e.g., The Evening of the Deluge (circa 1843), Light and Colour (Goethe’s Theory) – aka The Morning after the Deluge (circa 1843), shown at the top of this post. Even though Grayson may not have been consciously aware of any influence, On Stage, 1990 (left) can compare to Sunset

Grayson, like Turner in Shade and Darkness – the Evening of the Deluge (1843), uses advanced techniques for layering paint and constructing texture, originally developed in the Renaissance, to create a glow that seems to come from within the painting itself. Grayson’s Singularity-Black Box, 1999 illustrates how classical methods remain essential for contemporary abstract art.

Grayson’s The Glory, 1989 can also be compared to Turner’s The Angel Standing in the Sun, exhibited 1846.

Whitney Smith has a single work in the exhibition entitled, Europa, 199? , which is more than reminiscent of Turner’sRain, Steam and Speed – The Great Western Railway, (1844).Smith’s painting abstracts the scene of a bull emerging from a clouded or obscured landscape. Though not directly influenced by Turner, it might be said that Smith inherited his sense of abstraction through his influence of the whole of 20th century abstract painting.