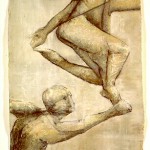 A selection of paintings and works on paper by James Gilroy.

Two works in particular, Untitled 2, 1997 (33 x 25″ oilstick on paper) and Untitled 3, 1997 (33 x 25″ oilstick on paper), represent figures that could be falling or dancing. In a body of work painted a year later, there are figures that are clearly falling, for example, Boxers, 1999 (48 x 38″ oil on linen) and V, 1998 (48 x 32″, oil on linen). In V the figure is shaped like the letter V or a downward arrow. Other V patterns echo throughout the figure: in the arms that both reach up, in the bended knee. Although the figure is falling, there is calm in the face of the hopelessness of the situation. In the midst of this terrible fall, there is a graceful slope to his back and arm. In Impact, 1998 (46 x 28″ oil on linen), a painting done roughly in the same style as Boxers and V, a man crouches between two planes, which appear to represent buildings. The figure cowers, holding his hands over his head, as if to shield himself from something falling from above. His eyes look down. The two buildings in the background rush toward a vanishing point; yet, the figure is propelled forward. Somehow this reinforces a sense of both static gloom and energetic expansion that seems to pervade Gilroy’s work. In another painting in this body of work, there are Three Figures, 1998 (44 x 68″, oil on linen). Gilroy often forms planes through line and color. Here the blockiness of the background encloses some abstract dimensions, as the lighter areas of color recede. The arrangement of the three figures appears on a completely separate plane from the color fields, which appear to be buildings in the near and far distance. It is a clear blue day. On the left, a figure is falling head first. On the right, another figure, wearing a dress, enters the composition from above. Only her legs and part of her skirt are visible. Someone on the ground is ready to catch her. The generally oval placement of the three figures allows the eye to wander without starting or stopping; yet, each figure is complex and demands careful individual attention. Again here we see a contest between movement/confusion and focus/peace.