VN ALexander will be available to give public lectures through the New York Council for the Humanities.  Qualifying non-profit organizations in New York State can apply online at nyhumanities.org 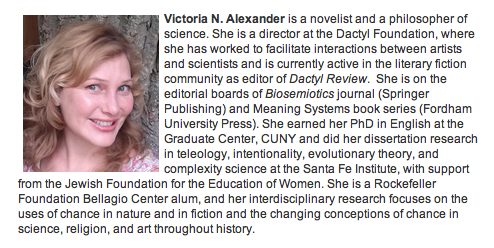 Alexander will be lecturing on the following topics:

Vladimir Nabokov and Insect Mimicry: the artist as scientist

Nabokov thought look-alike butterflies could appear in a single generation, by chance, without serving any purpose. He had spent years studying and drawing wing patterns with an artist’s eye and could guess how they were likely to change. Since Nabokov was also a devout empiricist, he tasted the monarch and viceroy for himself and found both bitter. It took other scientists thirty years watching mockingbirds do taste tests to come to the same conclusion. He also thought the deadleaf butterfly is a product of chance, because, for one thing, it doesn’t look anything like the leaves in its neighborhood. Nabokov claimed he “found in mimicry the kinds of non-utilitarian delights he sought in art.”

The Darwinists in the 40s didn’t appreciate Nabokov’s logic or his audacity and attacked him for being unscientific. But recently some of his work has been vindicated by DNA analysis, showing that his artistic intuitions were incredibly accurate. It now seems amazing new forms may appear in a single generation. In his fiction, Nabokov compared such coincidences as mimicry to a funny typo that could give new meaning to a sentence: “the chance that mimics choice, the flaw that looks like a flower.”

The presentation will include many fantastic images of insect mimicry and Nabokov’s own butterfly drawings. We will discuss how Nabokov’s experience creating imaginary worlds gave him insight into the process of creation in the natural world and how important art is to good science.

What can Art teach us about Artificial Intelligence?

With the rise of smart phones and weapons and artificial intelligence, we may wonder, What is intelligence?  What’s the difference between an organism and a machine that can seek an object, read a sign, or preserve itself?  Both can obtain goals, set either by evolution or design.  Can a robot learn?  If so, do organisms and machines use similar methods for learning, remembering and interpreting?

Philosophers have long debated whether or not animals are really organic machines. Some think that an animal interpreting something in the environment and apparently making a choice is actually controlled by countless physical forces. If so, then eventually science should be able to create true artificial intelligence.

Or maybe not. Biologists studying cell signaling have found that even the simplest unit of life can make interpretations in ways that most complex smart machines cannot. Biological processes can be creative; they can seize upon chance associations, which machines are usually designed to ignore. Some smart technologies now use fuzzy logic or neural networks to make them more flexible and precise, but as yet machines are still unable to invent new knowledge in the way that organisms can.

Questions about interpretation and learning are questions about contextual meaning and creativity, topics that traditionally have been viewed as off limits to science and left to artists and poets to ponder. Now some scientists are turning to artists to better understand intelligence. Examining smart technologies can inspire us to learn about our own learning processes and improve the way we approach education and communication. It may also help us decide whether or not it’s a good idea to make truly intelligent machines. This presentation will give audiences access to the abstract world of cognition through clear visual models and creative examples using puns, narratives, and poetry.