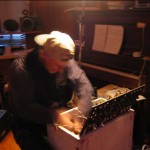 Why Are They Fighting?

Michael Schippling is an artist who builds robots designed to act creativity. He notes that most independent artists working in robotics have succumbed to building fighting machines for TV audiences. Michael will be a featured guest at our Compost Modern discussion forum, giving us what he calls a “quirky history of Machine Art with a proposal for the future.”

The Modern era was the age of the Machine, control was the word. In 1943 the field of Cybernetics was founded by a neurophysiologist, a mathematician, and an engineer. Cybernetic processes were incorporated into artistic production almost as they were being developed in the scientific community. From 1950 to 1970 collaborations between artists, engineers, and scientists produced some major artistic developments. The Post-Modern era was the age of Information and irony was the rule. Artificial Intelligence research shifted from cybernetic bottom-up to symbolic top-down approaches. Taking a cue from Tinguely’s 1960 Homage to New York, Post Modern Punk Aesthetic machines that destroy each other became popular. There are many reasons for this stagnation of imagination: practical, psychological, and sociological. Flight-or-flight is the lowest level of evolution but it titillates the masses nonetheless. If you can’t make a real contribution you can always just destroy more that anyone else has before. So why bother to make it more complex. Will the Post-Post era be the age of Artificial Life and Complexity? Higher level function is difficult to create but simple social activities, like flocking and dancing, are within our grasp. If we can give up the Control Illusion, we can elicit interesting behaviors from otherwise simple systems. http://www.etantdonnes.com/TEXT/AboutSchip.html