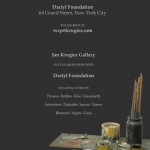 Jan Krugier was perhaps the most significant art collector and dealer of our times. His passion and uncompromising vision can be seen clearly in what is one of the greatest collections known. We at Dactyl are honored to have hosted Dialogues, the last exhibition curated by Jan Krugier, before he passed away. We are especially thankful to Izabela Grocholski and John Mollett who made this incredible event possible. We would also like to thank Hikari Yokoyama.

The (Re)Emergence of Language in Art

I. Art. Dactyl Foundation was established in 1996, “in the evening of the postmodern day,” in response to the critical postures assumed in that period, which was then nearing its end. We were concerned to heal the breach that had widened between classical and contemporary art. To this end, we developed and have provided support for an aesthetic that is informed by science, history, and philosophy. Our visual art exhibitions are supplemented with research and conferences that reconnect contemporary art with its past so that in its future it may have optimum adaptability and complexity. With “Dialogues,” we continue to further our goals, presenting visual languages that unite disparate genres and times. That art is a language — a self-organized set of enabling constraints, emergent, not prescribed, poetic in its logic, malleable in its rules — is what an exhibition such this so aptly demonstrates. Selected by Jan Krugier Gallery, each work in this show reflects a well-developed sense of aesthetics, a sense which we hope to explore using tools of complexity science and triadic semiotics, areas of research that began to develop dramatically at the end of postmodernism and helped to mark its close. Our intention, then, is not to return to an outmoded humanism or essentialism, but to help usher in the new era of emergence.

The theory of emergence, as cultural provocateur, is not prescriptive. It does not have preferences for two dimensions, nor does it limit its subject matter, nor exclude a genre or medium, nor does it stipulate art’s appearance in any way. Instead it is a theory that helps us understand what creativity is, all the while insisting that its actual products will always be inherently unpredictable. It is not a pluralism that we advocate here, a mere tolerance of contradictory aesthetics. Ours is an attempt to understand what is common to all forms of creativity.

As the works in this exhibition speak, each to each, they form a new dialect. Difference and discord, with sufficient communication, tend naturally to concord. There is an aliveness to this collection that would never form out of homogeneity, and yet we arrive in the end with a new unity all the same. E pluribus unum. Bringing these disparate works into a coherent relation, Krugier uses the aesthetic language that he has developed carefully and over time. When one can identify a painting as a Turner, a Picasso, or a Bacon, one has learned to speak with it. The language it speaks is emergent,that is, beginning at a lower level with simple rules, a whole appears that cannot be reduced to those rules. If other paintings share the language, it is not in any mechanistic way that they come to know it and speak it too. It comes to the others as it came to the first, through experience. This dialogue runs both ways in time. A language that was silent in the past can be made audible by future works. Max Ernst’s Moon II is Baconesc. Ingres speaks Picasso. Soulages is an incipient Hugo. Many of these works have a Turneresc atmosphere that is borne out by being somewhat monochromatic, or by otherwise having a chromatic coherency, which, like Whitman’s poetry, admits differences and even contradictions. It is because of rather than despite difference that things do hold together (Fletcher 2003).  Such coherency is an effect one finds in nature’s underpainting, a background or sky that shines through, reflects upon, and unites the composition. Coorte, Goya, Monet, Music, and Petlin, achieve this effect with a single hue or light and shade. Differently in Barcelo, Beckmann, Bonnard, Dubuffet, Fehr, Goodwin, and Torres-Garcia, we see a chromatic coherency, which involves triadic relations. As we learned from Goethe, witnessed in pointillism, and found again in complexity science-inspired color theory, color has no inherent quality in and of itself but affects only in relation to others, and the whole is qualitatively different from the sum of its parts.

Each of these pieces have, without exception, a semiotic property. Whether highly abstracted or more literal, each piece refers to something not materially there. In some works it is only a feeling

expressed by form or color; in other works an image conveys the feeling. Asse’s twin vertical boxes in their post-911 context, point to the fallen towers, accidental iconicity perhaps, for no other pattern in the work itself calls forth this interpretation. Iteration self-stabilizes interpretation, and thus one must read this pattern with caution. The speck (Man) on the surface of Ernst’s sea is so much smaller than the tumultuous currents churning below. And while the air may be calm above the overall scene is ominous. The expression of Goya’s Loco signifies what he sees. Dubuffet’s man is like, in and of the Earth. In Beckmann, as person becomes icon, particularity remains only as the stretched umbilicus to humanity. The degree of success or failure of representation comes from the work’s own ability to teach the viewer its system by sharing the experience of its creation. These do so without supplementary text. They speak visually and work viscerally.

The confident and quick gestural stroke appears throughout many works in this exhibition and represents the way the human rather than the camera eye sees, focusing on one or few elements, leaving the rest to fade to unimportance. Finished and at the same time loose, the impressionistic daub is an optical illusion and an allusion to human optics. Hugo’s works have melodic lines that immediately affect the body with a sense of harmonic proportion and balance. If a line  jars, it does so meaningfully, as a sharp note asks its question and implies its own resolution.  The works by Hugo are especially felt, experienced by the body, and this is so because the body is capable of elaborate abstractions and responds to sophistication with its own sophisticated theories about the world.

Some pieces speak with a wider range of vocabulary than others. Some can be learned easily; others cannot.  The artist grows more easily in new directions the more semiotic freedom he has. Creativity is born of a progressive complexification of existing forms through processes involving constant partial disintegration and reintegration. Bringing so many languages together in two rooms, Krugier and Dactyl offer young painters the richness of history and the opportunity to emerge, hopeful, radical, and beautiful.

Emergence is a concept used in the sciences to appreciate how organisms act with intention (Alexander 2009), how new biological forms appear (Reid 2007), and how the laws of physics come from the chaos of the quantum world (Laughlin 2005). For us, in the arts, it performs the role of showing how visual languages form, have meaning, and change.  Art as an emergent begins with an already existing self-organized system (i.e. convention), or self-organizes its own. A language system

To further elucidate the above, firstly creativity begins within a language; it can be a living one, a dead one, a complex or simple one, private or public.  But creativity must begin within a systematic set of relations that function to maintain those relations. If a private one is used, then it is incumbent upon the artist to teach his viewers his language with the art itself, independent of supplementary texts and theories. If a public one is used, the artist must use it in her own distinct way. If one prefers to avoid language, one then is left assembling aggregates of objects randomly and any artistry found in such work is that of the viewer.

The second condition of art as emergent not only rescues the artist from solipsism, butmakes the artist, in the sense that subjectivity is defined by the limited ways one reacts with one’s surroundings. One has to embrace a discourse if one wishes to communicate with others and create something new; one can neither avoid, nor should one wish to avoid being captivated by one’s own assumptions. As the complexity sciences have shown, constraints are the very engines of creativity. Because existing as part of a system makes one different to others outside of that system, there is possibility for change and growth through the “error” of finding accidental relations.

The third condition concerns the role of poetry in affecting this change, and although it is couched in scientific-theoretic terms here, it should be otherwise familiar. Interpretation of art involves an understanding of the novel associations it makes. But while patterns may be easily recognized, sensed or felt, what they may represent is less easily interpreted. Interpretation is an organic process not a machinic one.  Algorithms “if x then y”, for example, are not suitable metaphors for the patterns artists employ. For artists, x and a y do not depend upon identity relation. Any kind of vague likeness of x to something or chance proximity of y to something will do to evolve a connection. These kinds of associations, though they teeter on the brink of insanity and obscurity, sometimes reveal true affinities that no one would have been able to conceive with previously existing semiotic systems. This is how we learn new things and how language grows.

Symbolic language originates in processes that link constituents, based on coincidental likenesses and chance proximities, to form a dynamically stable whole. Our brains apparently work like artists too, even when or especially when most logical.  We may have believed that reason is linear and prescribed, but actually, at the most basic level of neuronal processes, such poetic associations as described here generate, through a permissive selection process coupled with innumerable iterations, the law-like sense we call coherent thoughts, styles and languages. We may say that iterations so numerous are corrective, that is, tending toward truth (Short 2007), but the product nevertheless remains unpredictable due the poetic flexibility of the formal selection process.

Since its inception, Dactyl has looked for and nourished artistic language in contemporary art. By integrating Krugier’s exceptional collection with research in the sciences and in philosophy, we hope to convey a better understanding of language and discourse, not as a totalizing system adverse to creativity, but as the ground for further exploration and experiment. Looking back now, we see postmodernism as equivalent to a period in evolutionary history in which organisms are under stress and subsequent disintegration.  In such times, systems (species, languages, organisms) once stabilized by natural selection (traditions) loosen. It is now the moment in which a new reintegration with greater adaptability may occur. We only have to take the time now to reacquaint ourselves with our past, understand our traditions, and make a new sense of the aesthetics we’ve inherited.

Fletcher, Angus. New Theory for American Poetry:Democracy, the Environment, and the Future of Imagination. Harvard UP: Cambridge, 2004.